NEWTON, Ala. – February 17, 2017 – As a leading provider of mobile video surveillance solutions, AngelTrax continues to excel as an innovator of new technologies for the transportation industry with the introduction of the revolutionary Vulcan™ Series in-vehicle surveillance systems and Pro8 Central Management System software. This new product lineup will offer clients full HD video of up to 1080P and up to 4 mega-pixel resolution, along with the ability to schedule or automatically download video clips via Wi-Fi or cellular with Pro8 CMS. 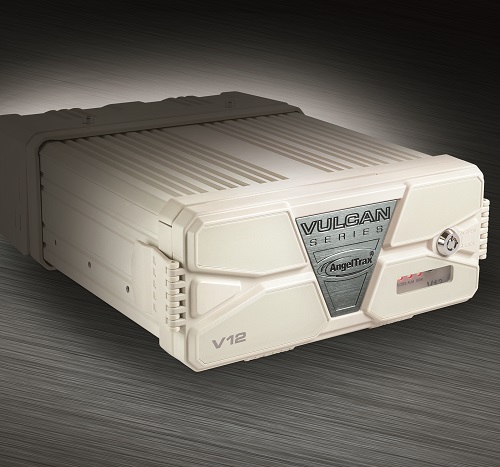 Vulcan Series DVRs are engineered to record IP cameras and HD cameras on the same system and display them simultaneously on screen during playback. Recording two types of camera feeds on the same system enables the fleet operator to have IP cameras installed in key locations where clarity is needed most. However, IP camera channels require more storage than other types of recordings, and this can limit the number of hours that can be stored on the DVR. The solution is to capture the majority of camera views with true high-definition cameras.

With the unveiling of the Vulcan Series, AngelTrax debuted Pro8 CMS software. Tailor-made to provide transportation directors with much more than video playback, this feature-full system allows the director to schedule or automatically download video clips, via true highspeed Wi-Fi or cellular, and display all camera channels simultaneously, including true HD and IP. Using an active Internet connection, Pro8 is capable of sending DVR alerts via text or email to pre-selected authorized personnel. AngelTrax debuted the new technology to its corporate sales force at the company’s 2017 National Sales Meeting, a two-day event in January spotlighting the new Vulcan Series with intensive training on the operation, installation, functions and features of the new product line’s DVRs, cameras and accessories.

“This year’s National Sales Meeting was especially important in the life of our company because of the impact the new Vulcan product line will have on our business,” commented CEO and President Richie Howard. “Each of our regional sales executives is now equipped to take this technology to our customers and show them firsthand how Vulcan systems provide improved video clarity and increased functionality.”

In addition to top-notch performance and versatility in its functions as mobile recorders, Vulcan DVRs are equipped with power connections for auxiliary systems including but not limited to public address systems, signage and onboard diagnostics. 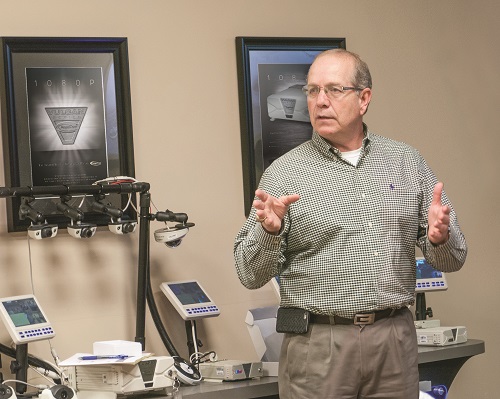 Each Vulcan DVR is encased in a shock-mounted, military grade, cast aluminum housing with a vandal-resistant locking front cover, with the exception of the V5, which features a vandal-resistant locking solid-state drive. The optional dashboard-mounted remote status indicator features LEDs to show the status of the DVR without using a video monitor. 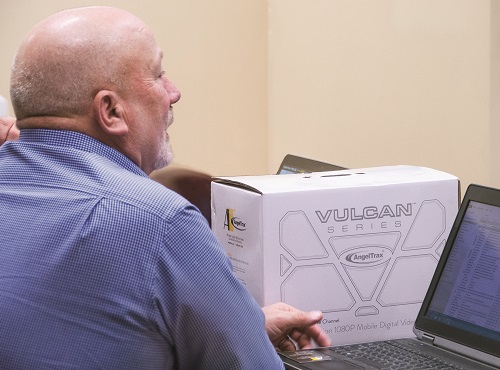 Alerts, triggered by the driver-operated panic button or one of eight configurable alarms, automatically mark video for supervisor review during playback. Each Vulcan DVR features a built-in interface compatible with an optional AngelTrax passive GPS sensor, which embeds GPS coordinates into the video’s metadata for reference during playback.

For a street map view of the vehicle’s route, opt for patented AngelTrax Virtual Synchronized Mapping (VSM™) technology, which provides absolute GPS accuracy synchronized with recorded video footage. Every stop, start and turn is perfectly synced with the highest quality audio and video from all the right angles.

For more information about Vulcan Series DVRs, cameras and software, contact AngelTrax toll-free at 800.673.1788 or on-line at www.angeltrax.com for a customer service experience that is unrivaled in the mobile video surveillance industry.